Singing songs about life as parents and children.

Have you met our favorite artist? 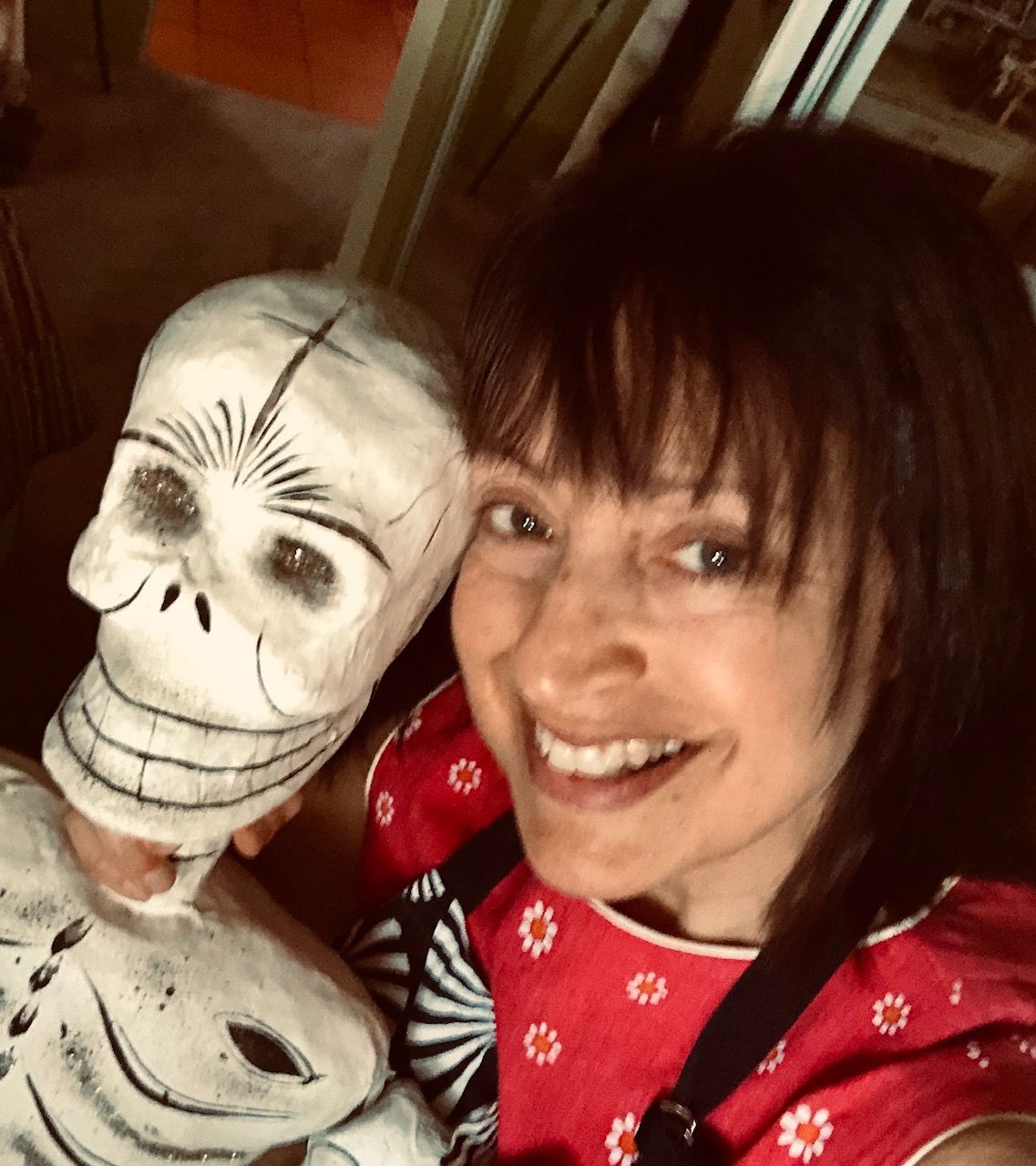 Christine Benjamin has created every character that you see on The Dilly Dallies albums.  She has an great eye for detail and a very creative spirit.  But, you may not know that she isn't primarily a children's artist!  She's great at tons of styles, including some of my favorite Tiki art.

We were excited to have her work on our first album and now, after our 3rd release, we are even more excited about calling her our Dilly Dallies artist.  We interviewed her so that you (and us) could learn more about her and the art she creates.  Check it out below and please take some time to look at her website or visit one of her art shows. 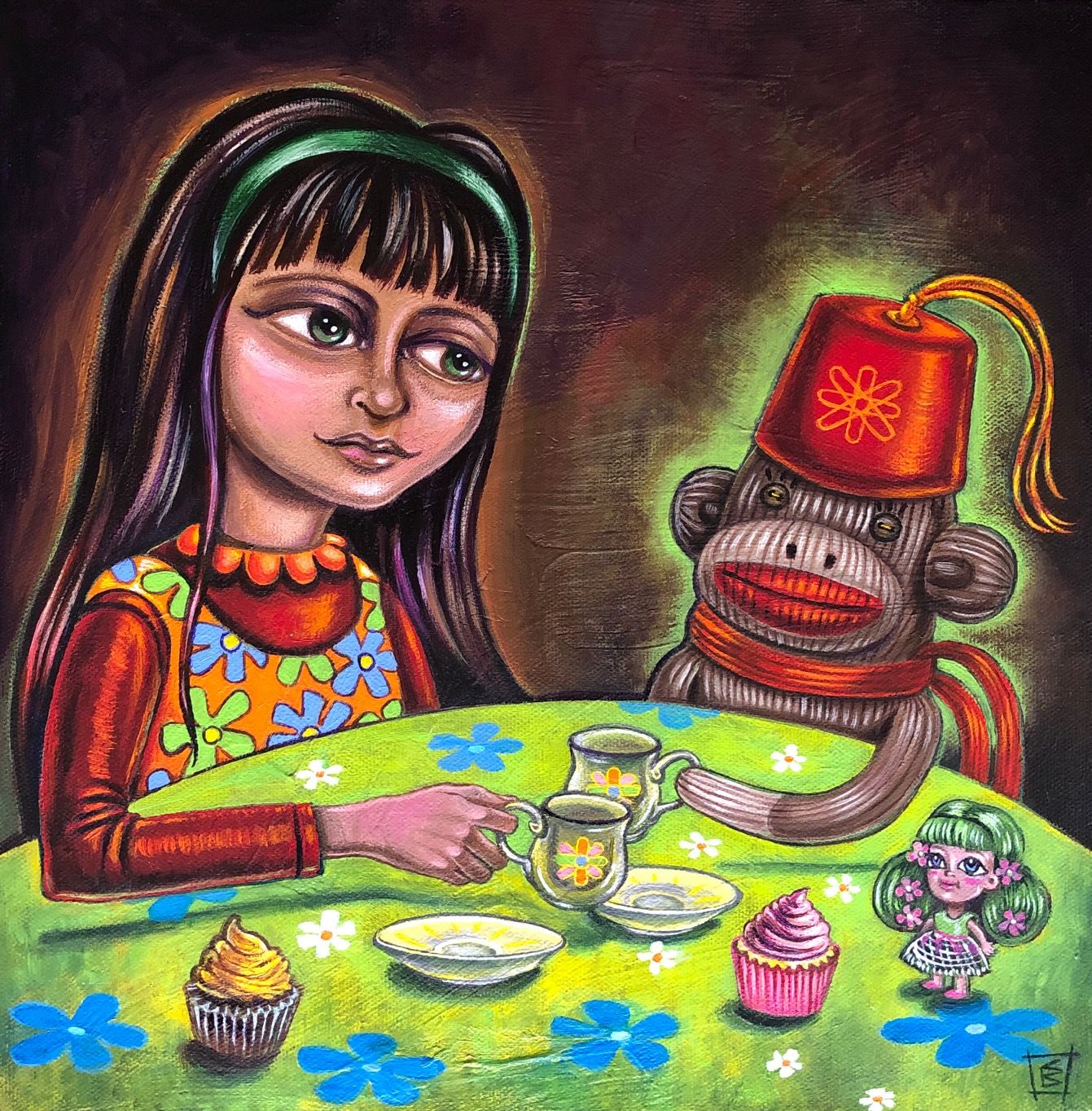 What is your specific style of art?

My style of art is colorful and whimsical. I love to create characters from my imagination. These characters are sometimes robot families, animals wearing clothing, aliens in space ships, or skeletons dancing.

Does your artwork represent something about you?

I think my art represents the fun and light hearted side of myself. 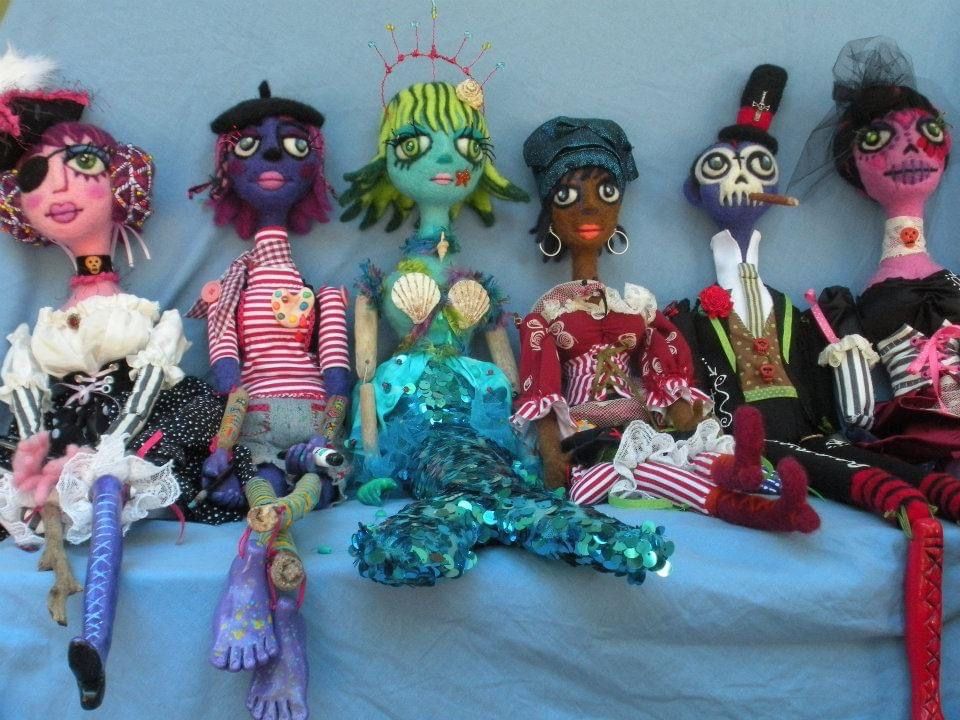 What is your process when creating a new piece of art?

My process of creating a new piece of art usually starts with an idea and I think about how to best represent it. Then I come up with pencil sketches on paper and either start to create it on the computer or on wood or canvas.

Who are your biggest influences?

Some of my influences are other artists, writers and comedians such as Van Gogh, M.C. Escher, Frida Kahlo, Salley Mavor, Maxine Hong Kingston, Bruce McCullough and Noel Fielding. 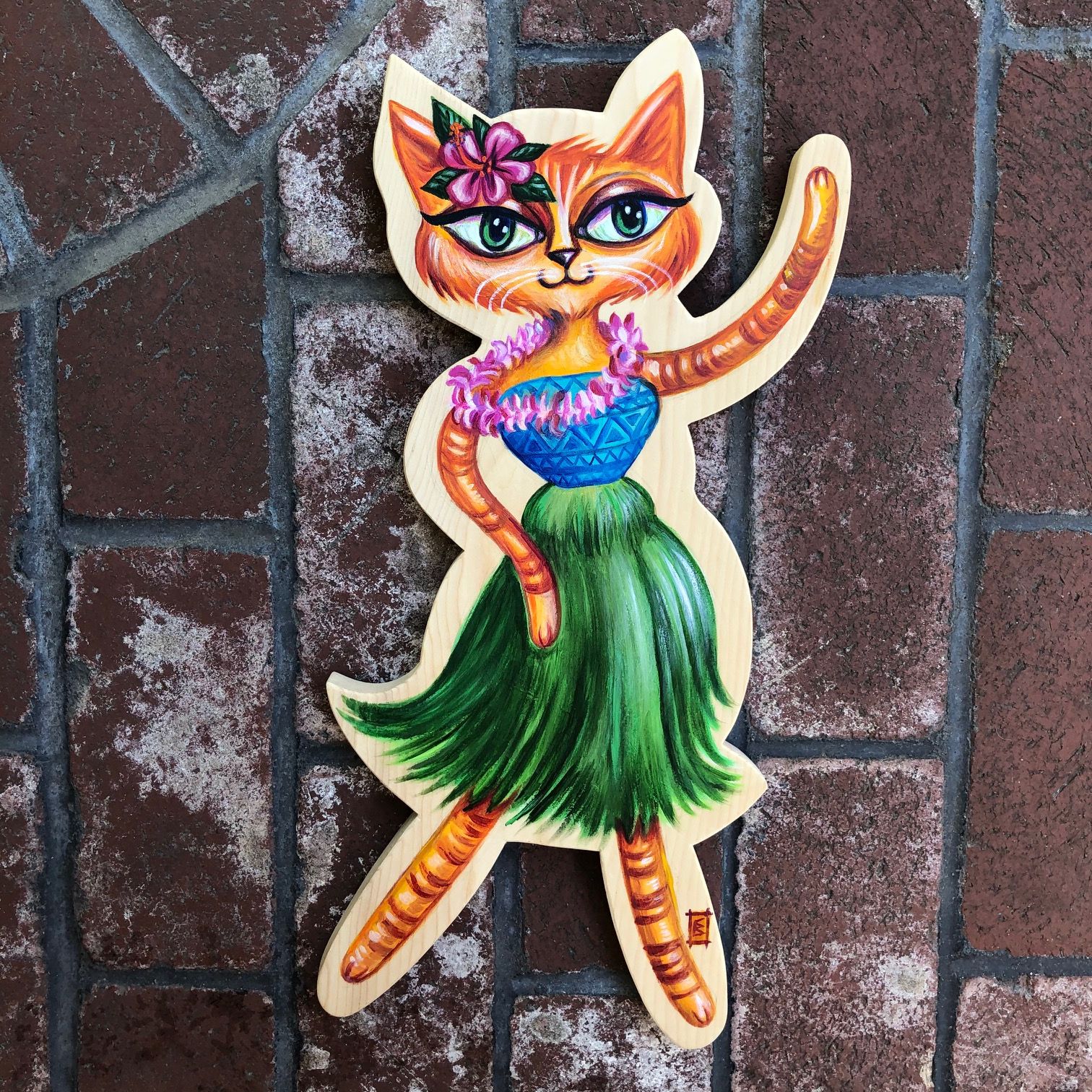 What was your inspiration when creating artwork for The Dilly Dallies?

My inspiration for the art for The Dilly Dallies was the songs. I would read the lyrics and come up with different characters in situations that would represent the music in creative ways.

Who is your favorite Dilly Dallies character and what kind of personality would they have if they could come to life?

My favorite character is the sock monkey who wears the hat. He would be sometimes a dapper gentleman and also a mischievous monkey.

Thanks Christine!  Your art is great, the kids love it, the parents love it and we love it.  Keep up the good work!

How long did it take to make Do You Think I’m Weird??

It took about 3 years to complete the album from start to finish.  Sometimes songs are written, but they don’t make it on the album so they’re set aside for a later release.  Sometimes they never end up on an album!

The recording process took about two years.  When you are recording in your off time (nights and weekends) it takes longer to record.  Recording one night a week is not a very efficient way of recording, but that is what we had to work with.  Both of us were performing a lot at preschools, raising children, cooking, cleaning and rehearsing with multiple musical groups or doing theatre.  And while recording Do You Think I’m Weird? was a priority, our schedules are very demanding and didn’t allow for long days in the studio.  So we made it work slowly over a long period of time.

Did anything else slow the process down?

Oh boy, YES!  In the middle of recording our wonderful recording engineer had a roller blading accident and broke his knee cap!  He was out of commission for a several weeks, so that set us back a bit.

Then there was the pandemic (which we probably don’t need to talk about), but needless to say that put the recording process on hold for months.  When the pandemic started we had basically finished all the recording, with the exception of a few tracks.  We ended up recording the final tracks at our homes (kids talking, keyboard tracks, drums…) and sending them into our mixing engineer. Our recording engineer then got a really bad case of poison oak (poor guy!) and was unable to work for several weeks (again).

When the music was finally done and we needed some last tweaks to the art, Christine Benjamin (our incredible artist) had severe back pain and ended up having back surgery! This (understandably) put the final art on hold for a couple of months.

Christine and Brad are both in good health now and the album was eventually completed. Yay!  It was definitely a wild ride getting to the point of completion though!

Do you two have any favorite tracks?

Steve:  I really like Sketchbook.  The lyrics are a story, which is different from a lot of our songs.  The harmonies and melody sound really great together and the song moves along really well from start to finish.

Jenn: I love Let Me Breath You In. I’m a sucker for a sweet lullaby that parents can relate to. While we never get to play them live, I imagine parents playing them to their babies or toddlers at bedtime (getting as many snuggles in as possible). If we can help create such tender moments between a parent and a child, then that makes me a happy musician. I also really love our cover of Luna. It’s a song I’ve loved since high school when I was a huge Smashing Pumpkins fan.

How many instruments are on this album?

There are the basics that we use everyday:

What do you hope people like about the album?

Steve:  I hope that people like the melodies and lyrics.  I really want kids and families to dance, sing and relax listening to this new album.  Don’t take it all too seriously, it’s just for fun after all.

Jenn: I hope people enjoy the special moments that are created when hanging out with their kids and listening to The Dilly Dallies. I love thinking that we’re bringing families together over a shared love of fun and creative music.

It's been a weird few months.  We were pushing hard to get our new album finished and then we all had to stay home and shelter.  The plus side is that when we stay home and spend extra time with our kids, we are actually helping people stay healthy.  It's a win win for everybody.

Staying home has also helped us think of new ways to entertain you from our living room. Check out the living concerts linked below.

Have a great day and enjoy the new videos.

Pretending It's The Weekend

Flying Into The Living Room

We are super excited to be throwing our 2nd holiday party at The Local in Alameda.  Last years party was so much fun!  It's happening on the last day of school before winter break.  It's a great way to kick off the vacation, with live music, holiday songs, hot chocolate (or wine) and food.  We hope you can join us. 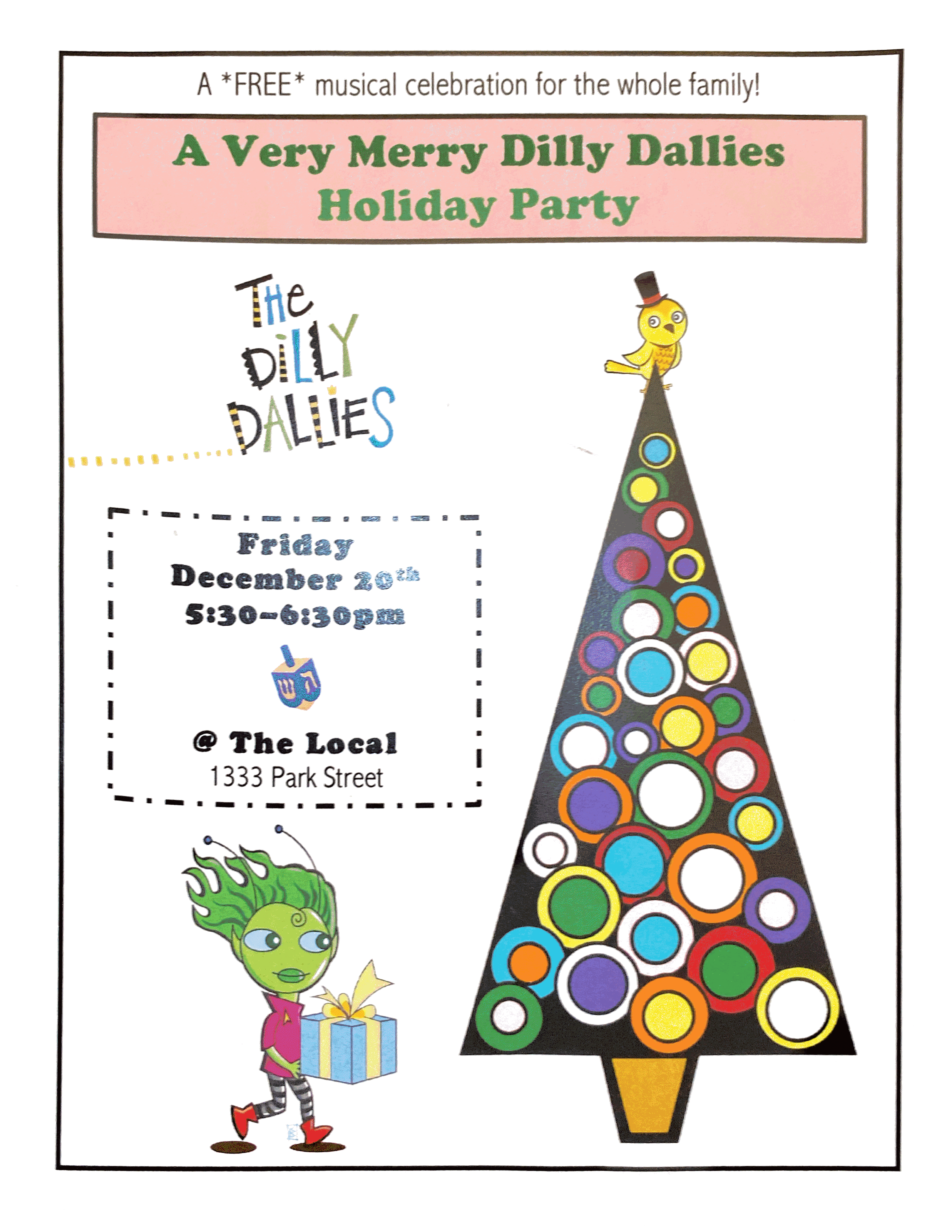 Listen to The Dilly Dallies on Spotify!